Skip to content
Entertainment News
March 20, 2021 BXM “If I die, I die”- Omah Lay Plans to Risk His Life For His First Concert

“If I die, I die”- Omah Lay Plans to Risk His Life For His First Concert

Godly Crooner,  Omah Lay has shared his plans for his first concert when the lockdown restrictions end.

The 23-year-old singer isn’t planning to just Go big or Go home, he is prepared to die for this concert.  Omah Lay informed fans that when the “world opens again”, his first concert is going to be one they won’t forget in a hurry. In his disturbing, yet hilarious tweet, he talked about jumping into the crowd during the concert. 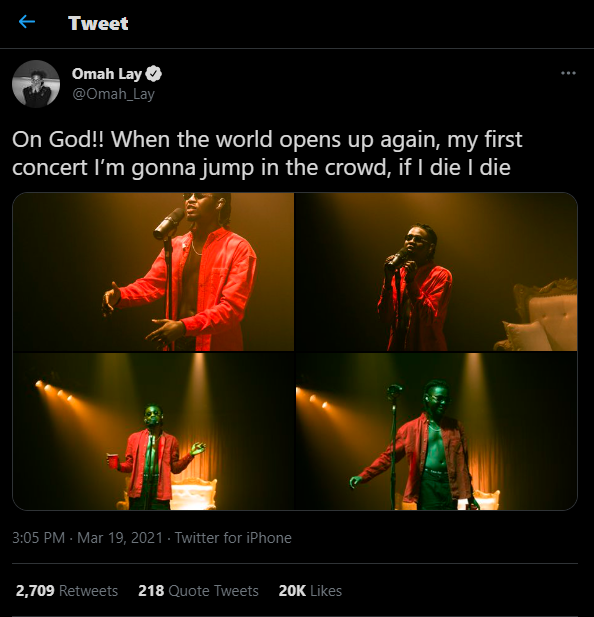 Recall, Omah Lay and Tems were arrested last year after their concert in Uganda for defaulting the covid guidelines. To prevent Omah Lay’s attachment to another security scandal, Fans who be attending this concert have been advised not to hesitate to catch him when he falls.

Oil bunkering: Wike tells Nigerian Navy what to do thieves

Do You Have A Problem? See What Naira Marley Advises You To Do Instead